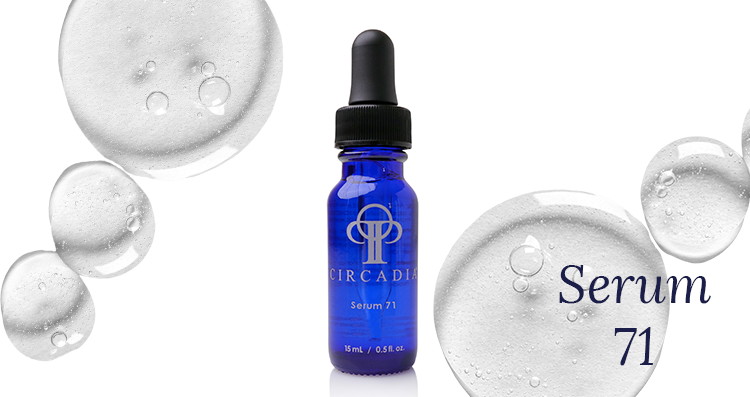 A Nod to the Past, an Eye to the Future

In 1971, Dr. Peter Pugliese joined the Society of Cosmetic Chemists resulting in a major career shift that would ultimately change the trajectory of his life and the skincare industry.

One particular ingredient, popular in many formulations today, can be directly credited to Dr. Pugliese’s research.  Dr. Pugliese did the initial clinical studies on the first ever commercially available peptide for cosmetic use in the 1980s.  This groundbreaking research led to the expansion of peptides used in personal care products worldwide. In his studies, he discovered that copper assists in fibroblast activity and works as an antioxidant by preventing free radical damage.

In addition to his pioneering research on the copper peptide, Dr. Pugliese conducted the original penetration tests of Beta Glucan on the skin in the late 80s, paving the way for cosmetic formulators today

Fast forward to 2023, and Circadia’s CEO Michael Pugliese is reviving his grandfather’s innovations but putting his own passionate spin on these industry-standard ingredients, bringing new excitement to an established ingredient profile. Enter Serum 71, a nod to the past, with an eye on the future.

Serum 71 is an immune-boosting, nutrient-rich formulation with a powerful trio of tranexamic, mandelic, and azelaic acids. Also included is a second-generation Beta Glucan and Neodermyl—the next-generation copper peptide that helps build back collagen and elastin better than ever before.

In bringing these ingredient technologies to the forefront of today’s innovations, we’re able to deliver the benefits of copper through Neodermyl, which some say offers rejuvenating properties like dermal filler after routine use. Neodermyl has an advanced delivery system that eliminates the sometimes-irritating issues seen with copper, making a great ingredient even better.

A New Acid on the Block

Tranexamic acid treats hyperpigmentation like hydroquinone, but it also improves the skin’s barrier function without the irritation and potential cytocell toxicity of hydroquinone. It inhibits tyrosinase activity and will help lighten and brighten the skin.

Beta Glucans are nature’s powerful medicine as they aid in wound healing and help fight infection. In skin care formulations, they will soothe irritated skin and rebalance the skin’s immune system.

“We have many ingredients that have become standard in skin care formulations, but the history behind them is important too. Each of these ingredients came from a person or people who were passionately pursuing them,” says Michael Pugliese, grandson of Dr. Pugliese, and now CEO.

Serum 71 is a powerful serum packed with potent ingredients, designed to deliver brightening, lightening, and tightening effects for all skin types. Named after the year Dr. Pugliese joined the Society of Cosmetic Chemists. In tribute to his immense contributions throughout his career as a chemist, Serum 71 is innovative for our time while honoring the rich history and work that went into creating it.

In early February, Serum 71 will be available through an authorized Circadia retailer near you.